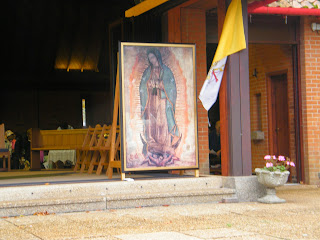 Up until the Protestant Revolt, the number of Catholic educational institutions which dotted the landscape of Europe measured in the thousands. Children from Norway and Sweden to Sicily and Malta were educated by the Benedictines, Dominicans and other orders. Adults listened to sermons on the doctrines of the Church and grew in their Faith.

The idea that the vast majority of people did not understand religion or the Scriptures is a lie perpetrated on purpose to undermine the authority of the Catholic Church. For centuries, the education of children and adults remained a priority among the Catholic hierarchy, and many reformers, such as the Archbishop of Canterbury, St. Anselm. renewed the seminaries demanding that the Trivium and Quadrivium be taught to the priests-to-be.

The high standard of education received a deadly blow of anti-intellectualism with the destruction of the authority of the Church, the destruction of the monastic schools, and the secularization of the ancient Catholic universities. The five "solas", which emphasize even today personal rather than authoritative interpretations of religious teaching, further created a new disenfranchised populace which no longer knew the Faith. Sadly, too many movies and documentaries insist on continuing, even in 2015, the lies that the Protestants created an educated mass populace, when the opposite is true.

Anti-intellectualism cannot be ever seen as a virtue. Reason and faith as gifts from God to the humans bring us to our adult acceptance of a mature stance of religion. For a study of the "solas", look at these links from wiki, which give a fairly decent explanation.


To ignore the intellect and the long history of Tradition in the Church makes one a Protestant. As Newman stated, one cannot study the Early Church Fathers and the Doctors of the Church and remain a Protestant. The truth converts.

It is the duty of every adult to appropriate the Faith through reading, study, watching orthodox aids, and so on. To ignore the adult responsibility of learning the Faith in a mature manner is the sin of spiritual sloth.

Today, I heard a fantastic sermon on the Trinity. The priest shared many perspectives on Church teaching in language which could be understood by most people. He also allowed for the mystery of Faith, which demands the we accept certain truths outside of our understanding.

Until adult Catholics appropriate the Faith in America, the same thing which happened in Ireland will happen here in America. Those who do not have the ability to understand the whys of Catholic teaching will fall for the majority ideologies.

As Fulton J. Sheen said a long time ago, "What do you call an ignorant Catholic? A Protestant."