Posted by Supertradmum
When I try to talk to Americans about simplifying their lives. I either get blank stares or anger.

IV. POLITICS AND ECONOMY IN DIALOGUE FOR HUMAN FULFILMENT

189. Politics must not be subject to the economy, nor should the economy be subject to the dictates of an efficiency-driven paradigm of technocracy. Today, in view of the common good, there is urgent need for politics and economics to enter into a frank dialogue in the service of life, especially human life. Saving banks at any cost, making the public pay the price, foregoing a firm commitment to reviewing and reforming the entire system, only reaffirms the absolute power of a financial system, a power which has no future and will only give rise to new crises after a slow, costly and only apparent recovery. The financial crisis of 2007-08 provided an opportunity to develop a new economy, more attentive to ethical principles, and new ways of regulating speculative financial practices and virtual wealth. But the response to the crisis did not include rethinking the outdated criteria which continue to rule the world. Production is not always rational, and is usually tied to economic variables which assign to products a value that does not necessarily correspond to their real worth. This frequently leads to an overproduction of some commodities, with unnecessary impact on the environment and with negative results on regional economies.[133] The financial bubble also tends to be a productive bubble. The problem of the real economy is not confronted with vigour, yet it is the real economy which makes diversification and improvement in production possible, helps companies to function well, and enables small and medium businesses to develop and create employment.
190. Here too, it should always be kept in mind that “environmental protection cannot be assured solely on the basis of financial calculations of costs and benefits. The environment is one of those goods that cannot be adequately safeguarded or promoted by market forces”.[134] Once more, we need to reject a magical conception of the market, which would suggest that problems can be solved simply by an increase in the profits of companies or individuals. Is it realistic to hope that those who are obsessed with maximizing profits will stop to reflect on the environmental damage which they will leave behind for future generations? Where profits alone count, there can be no thinking about the rhythms of nature, its phases of decay and regeneration, or the complexity of ecosystems which may be gravely upset by human intervention. Moreover, biodiversity is considered at most a deposit of economic resources available for exploitation, with no serious thought for the real value of things, their significance for persons and cultures, or the concerns and needs of the poor.
191. Whenever these questions are raised, some react by accusing others of irrationally attempting to stand in the way of progress and human development. But we need to grow in the conviction that a decrease in the pace of production and consumption can at times give rise to another form of progress and development. Efforts to promote a sustainable use of natural resources are not a waste of money, but rather an investment capable of providing other economic benefits in the medium term. If we look at the larger picture, we can see that more diversified and innovative forms of production which impact less on the environment can prove very profitable. It is a matter of openness to different possibilities which do not involve stifling human creativity and its ideals of progress, but rather directing that energy along new channels.

First of all, for people to want to use resources responsibly, they have to believe in personal responsibility.

Second of all, we must decide to live more simply...Here is Francis quoting Benedict.

Benedict XVI has said that “technologically advanced societies must be prepared to encourage more sober lifestyles, while reducing their energy consumption and improving its efficiency”.[135]

Put simply, it is a matter of redefining our notion of progress. A technological and economic development which does not leave in its wake a better world and an integrally higher quality of life cannot be considered progress. Frequently, in fact, people’s quality of life actually diminishes – by the deterioration of the environment, the low quality of food or the depletion of resources – in the midst of economic growth. In this context, talk of sustainable growth usually becomes a way of distracting attention and offering excuses. It absorbs the language and values of ecology into the categories of finance and technocracy, and the social and environmental responsibility of businesses often gets reduced to a series of marketing and image-enhancing measures. 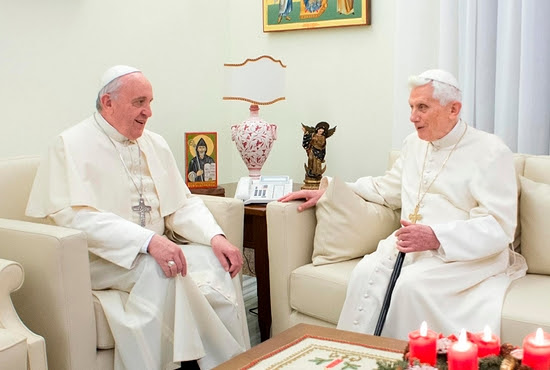 195. The principle of the maximization of profits, frequently isolated from other considerations, reflects a misunderstanding of the very concept of the economy. As long as production is increased, little concern is given to whether it is at the cost of future resources or the health of the environment; as long as the clearing of a forest increases production, no one calculates the losses entailed in the desertification of the land, the harm done to biodiversity or the increased pollution. In a word, businesses profit by calculating and paying only a fraction of the costs involved. Yet only when “the economic and social costs of using up shared environmental resources are recognized with transparency and fully borne by those who incur them, not by other peoples or future generations”,[138] can those actions be considered ethical. An instrumental way of reasoning, which provides a purely static analysis of realities in the service of present needs, is at work whether resources are allocated by the market or by state central planning.


196. What happens with politics? Let us keep in mind the principle of subsidiarity, which grants freedom to develop the capabilities present at every level of society, while also demanding a greater sense of responsibility for the common good from those who wield greater power. Today, it is the case that some economic sectors exercise more power than states themselves. But economics without politics cannot be justified, since this would make it impossible to favour other ways of handling the various aspects of the present crisis. The mindset which leaves no room for sincere concern for the environment is the same mindset which lacks concern for the inclusion of the most vulnerable members of society. For “the current model, with its emphasis on success and self-reliance, does not appear to favour an investment in efforts to help the slow, the weak or the less talented to find opportunities in life”.[139]